Map of the Moon

Hi. My name is Michael Schmeling and I would like to introduce the most beautiful map of the Moon you will ever see. I wanted to create an artistic view of Earth's Moon which is not only pretty, but also informative.

The map of the moon inspires everyone who takes a closer look at Earth's natural satellite. The Moon poster is based on exact data of the NASA / IAU and shows both sides of the moon with important mountains and valleys, "seas" and bays. In addition, it features accurate landing sites of all successful moon landings by manned and unmanned spacecrafts to date. The map of the Moon appeals to all those interested in the Moon, whether layman, artist, trekker, stargazer or creator of new, fantastic worlds in the infinite universe. The lunar map is as informative as it is artistic and absolutely decorative. A must-have and great gift that inspires dreams. 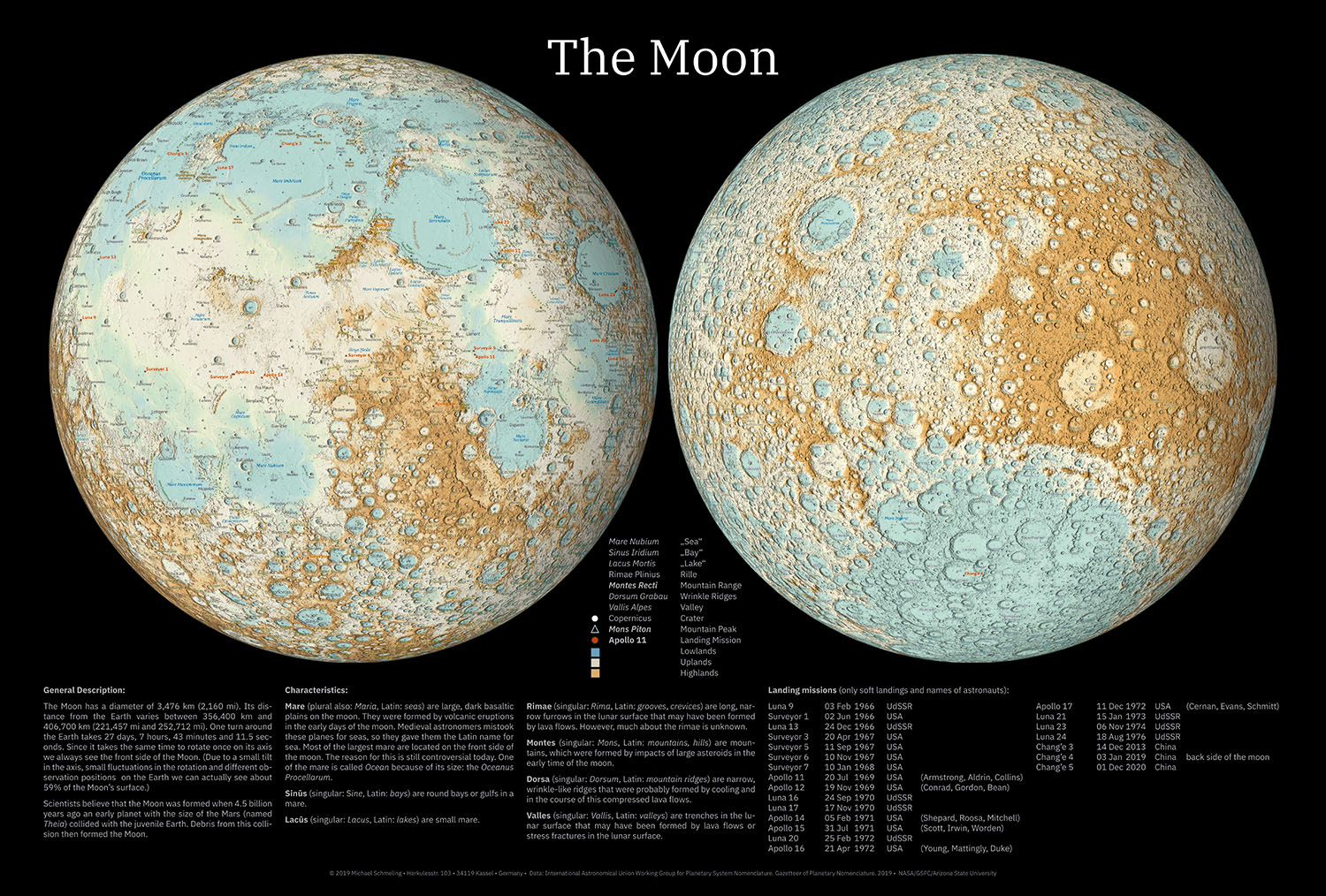 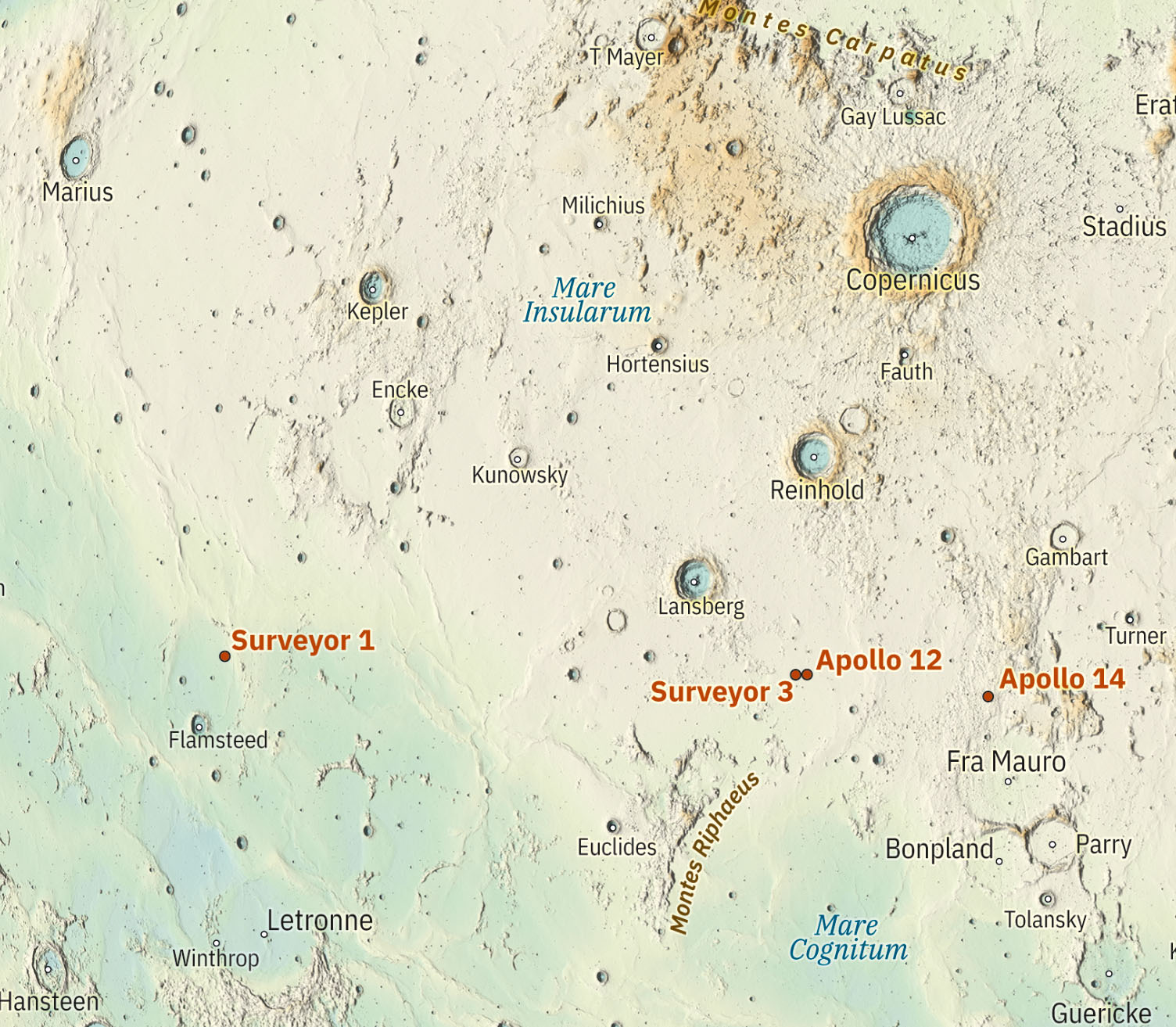 Buy the Moon Map as a Wall Poster

My manufacturing partner and reseller is Zazzle.
You will be redirected to the Zazzle website where you can choose between different sizes and paper types.
You can even add frames to the poster.
I recommend a larger paper size, otherwise the smaller text may become illegible.

The Moon. A natural satellite, which is inseparably connected to the earth and has an amazing influence on earth, seas, plants and living beings. Since time immemorial, people have worshipped the moon from afar. Then came Copernicus, Kepler, Galileo Galilei and others in the 16. and 17. century and with them the science of astronomy. Their goal: to learn more about the moon. What does it look like? What is the Trabant made of? What influence does it actually have on our lives and what are just myths and fairy tales, like the one about the man in the moon? An infinite catalogue of questions, which is far from being answered comprehensively. Because as soon as astronomers gain new knowledge about the moon, countless new questions arise.

At least the question of what the surface of the Moon looks like, and where exactly Apollo 11 and other lunar missions landed, is shown on the map of the Moon in a remarkable quality: beautiful, informative and extremely decorative.

What astronomers know about the Moon so far - fascinatingly well illustrated.

The Map of the Moon shows in detail what astronomers, astronauts and cosmonauts have discovered, mapped and precisely named on the Moon so far: A topographic map with clearly recognizable mountains and ranges of altitude, individual mountains and their peaks, valleys, seas and bays. Impressively accurate and ideally suited to travel with your fingers through the landing sites of the various lunar missions of Luna, Surveyor and Apollo. And much more: The map of the moon documents scientific findings in a very short time and at the same time invites to voyages of discovery on both sides of the moon. Be a part of it.

The Dark Side of the Moon - seen by light on the map of the moon.

The moon is a satellite. From Earth we only see 59 percent of it, the rest is in darkness. But, as it is with hidden, concealed things, it is exactly these things that arouse our curiosity even more. The protests against the Vietnam War initiated the Flower Power movement in the USA in 1970 and inspired Pink Floyd to record "The Dark Side of the Moon". Meanwhile, astronauts actually saw the moon from behind for the first time. A milestone in manned space travel and incredibly exciting to watch live on TV - even if you only saw snow flurries in the telly. The International Astronomical Union (IAU) named craters on the back of the moon after the brave astronauts of the Apollo 8 mission. An honour that is only bestowed on a few, selected personalities.

In the face of the moon. Inspiration for poets, painters and thinkers

For generations, the moon has inspired artists of every genre. Great masters such as Caspar David Friedrich and William Turner set painted monuments to the moon for eternity. The german poet Goethe wrote: «My best-beloved, my moon-face bright». Lullabies about the moon carry small children gently to sleep. So the fascination of the moon is stirred up at an early age.

In Star Trek, mankind created cities on the moon like Tycho City, New Berlin or Lake Armstrong. In Riker's glory days, 50 million people lived there. Is it all just movie fantasy? Yes and no.

What current lunar exploration actually has on the agenda.

Meanwhile, NASA, ESA and other countries are exploring ways to actually establish colonies on the moon. A Plan B for Earth. But even more than that, as a stepping stone for journeys to Mars and into the unfathomable vastness of the Milky Way and the whole universe. Dreams of the future? Sure. But it all starts with an exact map of the Moon. Because only if the intended landing site is sufficiently known and explored, the flight to the moon has a chance.
The next moon missions are already being planned: China, India, Russia, Japan and even some private companies have scheduled landing missions for the upcoming years.

Why should you buy a map of the moon?

The Map of the Moon is a topographical, colored representation of both sides of the moon. It is based on exact geographical data, names, important facts about the Moon and its features and lists all successful landing missions to date. If you too have succumbed to the fascination of the Moon, then you will be fascinated by the artistic map of the Moon. Its presentation is on the one hand exact and informative, but on the other hand it is also a visual delight for every friend of the moon.

Who is it for? Also as a gift!

Everybody who is interested in the moon and/or astronomy will be enthusiastic about this unique representation of the moon. No matter if student, visitor of a planetarium, prospective or practicing astronomer, stargazer, space travel or Star Trek fan, small or big kids with a soft spot for space and inspired to create new and better worlds.

They will all fall in love with this beautiful moon poster at first sight. Do you count yourself among them? Then you know what to do.

Buy the Moon Map as a Wall Poster

My manufacturing partner and reseller is Zazzle.
You will be redirected to the Zazzle website where you can choose between different sizes and paper types.
You can even add frames to the poster.
I recommend a larger paper size, otherwise the smaller text may become illegible.

All images are copyrighted and may not be used without explicit permission.

© 2019-2023 Michael Schmeling • All Rights Reserved • In association with Zazzle • Lunaposter is a participant in the Zazzle Affiliate Program •
• Promotional text by Fiona Amann: www.fiona-die-texterin.de •